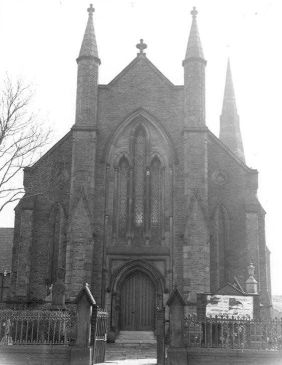 Queens Road Methodist Chapel was founded in 1850 and was closed in 1967. Over the 115 years of it's life, it catered for the spiritual needs of the folks of Hurst before finally being demolished in the 1960s. For the past thirty five years or so, a green space has been where the Chapel and it's grounds stood, but that is now to be replaced with modern houses.

There are about 125 Monumental Insciptions. It is not known whether or not these cover all of the burials as unfortunately the Burial Register has been lost over the years and whilst records of Baptisms and Marriages are at Manchester Central Library, they do not have a copy of the Burial Records.

I have copied this correctly. The original transcription might be incorrect (Antony)

Commemorated inside the Church